Twenty representatives from Virginia Welcome Centers across the state visited the AWM in June.  This Familiarization Tour, sponsored through a partnership between the Virginia Tourism Corporation and Petersburg Area Regional Tourism, was designed to introduce front line workers state attractions that they can then encourage travelers to visit.  Virginia is for Lovers!

NEW EXHIBIT COMING TO THE AWM!

The AWM and FAWMA are celebrating the achievements of the 6888th Central Postal Directory Battalion and LTC Charity Adams. The Naming Commission is recommending a new base name in her honor and the 6888th Congressional Gold Medal has been approved by Congress. The AWM with FAWMA’s support are planning to honor both the Six Triple-Eight and LTC Adams with an exhibit opening late 2023. Please help support our efforts!

Cydnee Gentry represented the Friends of the Army Women’s Museum Association at the Retirement and Appreciation Day on Nov 4th at JB Meyers-Henderson Hall. Veterans, active duty service  members, and government agencies from the federal, state, and local levels attended and offered  information on their services to the participants.

We met several veterans that were excited to share their stories. Thank you to COL (Ret) Pat Jernigan for  her help that day. FAWMA shared our mission of  supporting the Army Women’s Museum with over 100 in attendance.

The AWM was host to the Naming Commission.  Commissioners Admiral Michelle Howard, Mr. Jerry Buchannan, and Mr. Laurence Romo visited Fort Lee to hold a series of meetings and focus groups about selecting a new name for the fort. The consolidated staff of the Fort Lee Museums put forward the name of LTC Charity Adams, Commander of the 6888th Central Postal Battalion, whose story is told at the AWM!  If you would like more information about the Commission or if you would like to recommend a name, you can go to https://www.thenamingcommission.gov/.

The Gender Integration Initiative was launched on September 15th on the AWM and CMH Webpage.  https://history.army.mil/genderintegration/   The Initiative, led by our staff at the Army Women’s Museum, is a multimedia toolkit designed to give unit leaders the historical context, materials, and tools to educate their Soldiers about the Army’s experience with the post-9/11 integration of women into combat arms. The project is designed not as a lesson plan, but rather as a conversation starter to show the changing roles of women in the Army over the past 20 years. Hosted on the both the AWM and CMH websites, the page contains an overview video, an interactive timeline, a facilitator’s guide, and other additional resources to allow the user to interact with various aspects of the gender integration story at their own pace. The project has received positive feedback since launch, with people noting that it is engaging and consumable. One of the women featured wrote us to say she was very touched that we had highlighted her story, and a former Ranger was very glad that the Cultural Support Teams that he worked with in Afghanistan were represented.

A Summer Teacher Institute entitled Diversity and Service: The Road to Equity in the Military was held in partnership with the Virginia War Memorial.  The first day of the two day institute was hosted by the Army Women’s Museum with visits to the Quartermaster Museum and Ordnance Training Support Facility.  The day included a special presentation by an Educator from the National Museum of the United States Army. Day two was held at the Virginia War Memorial and featured a wide variety of speakers and stories, highlighting the history and experiences of women, African-Americans, Asian-Americans, and Indigenous people in the U.S. Military.

FAWMA’s virtual educator, Micaela Procopio did an interview with Esther Albert Bristow, of Petersburg, VA, who also served as a World War II WAC on June 8, 2021.  Mrs. Bristow was as a clerk-typist at the Pentagon and worked under both General Dwight Eisenhower and General Omar Bradley.  While she remembered both men fondly, Mrs. Bristow emphasized that General Bradley was an especially nice man who was willing to sit and talk with the WACs.  After the war, she was stationed at Camp Lee. (This interview is a direct result of a virtual class Micaela delivered to the Petersburg Home for Ladies.)

On May 27th, Cydnee Gentry and Tracy Bradford conducted a Zoom interview with Bobbie Fallon, a 99 year old WWII WAC. 1LT Bobbie Fallon trained to be a physical therapist during WWII at Fort Dix in New Jersey. She later was sent to Rouen, France on the Queen Mary to serve as a member of the Women’s Auxiliary Army Corps and to rehabilitate soldiers. Thank you for your service Lt Fallon!

CWO5 (R) Denise Scarboro, represented the Friends of the Army Women’s Museum Association (FAWMA) at the Newcomer’s Brief at Joint Base Lewis-McChord on Feb 3, 2020 at JB Lewis-McChord, WA. The event brought together active duty service members, community leaders, veterans, employers, and government agencies from the federal, state, and local levels to raise awareness about the services and benefits offered to its military members aboard the base. Denise shared our mission of telling the story of women in the service to our country and supporting the Army Women’s Museum. 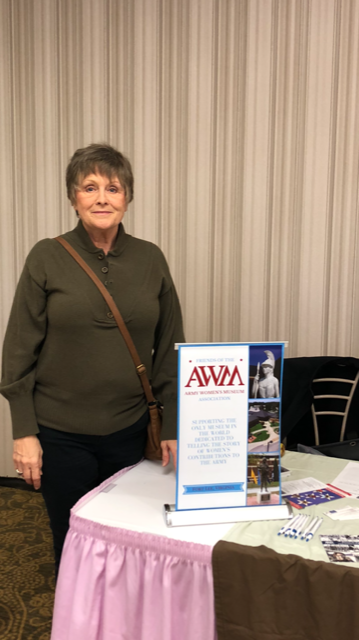 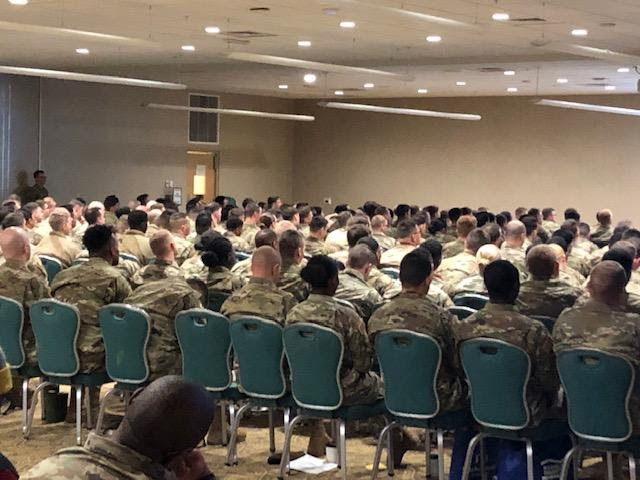 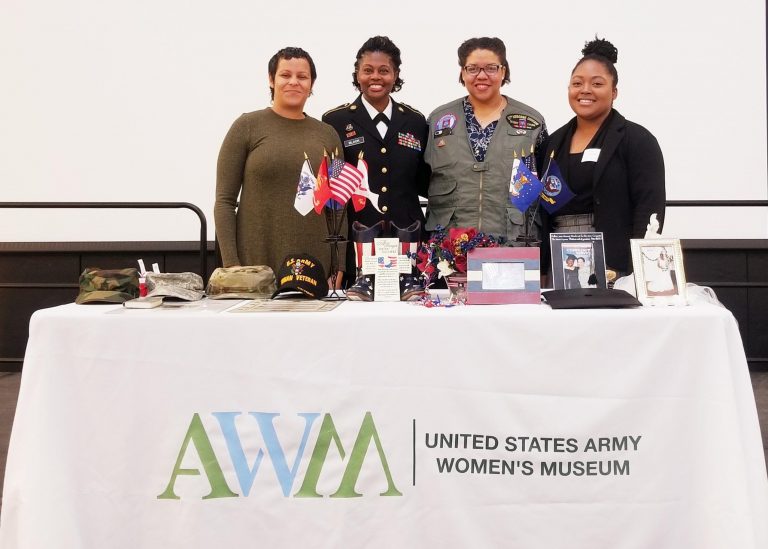 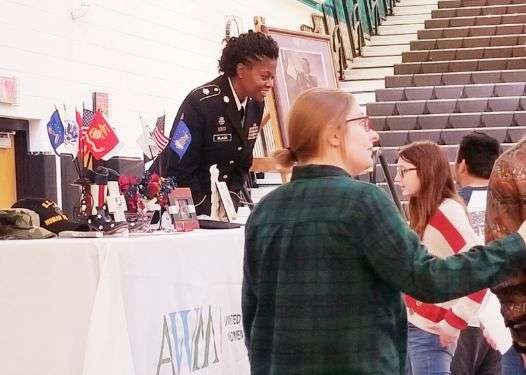 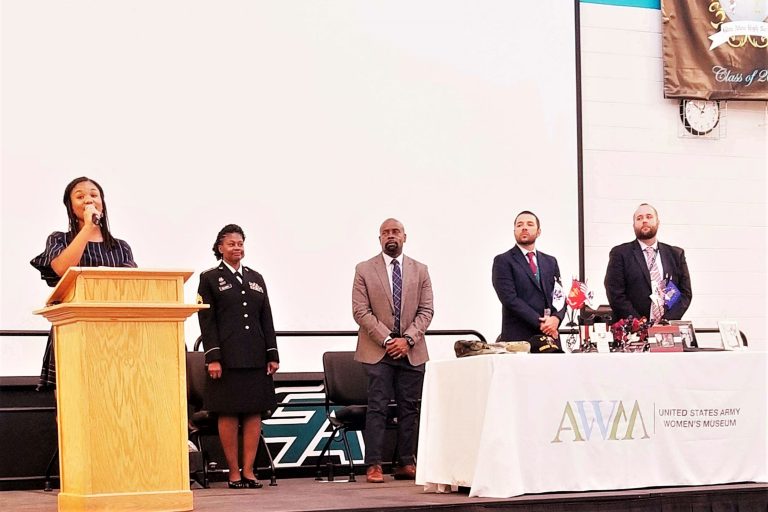 ﻿The AUSA Annual Meeting and Exposition is the largest land power exposition and professional development forum in North America. Taking place over three days, the Annual Meeting is designed to deliver the Army’s message by highlighting the capabilities of organizations and presenting a wide range of industry products and services. AUSA accomplishes this task throughout the entire event by providing informative and relevant presentations on the State-of-the-Army, panel discussions and seminars on pertinent military and national security subjects, and a variety of valuable networking events available to all that attend. FAWMA was able to contribute to this message by providing leadership programming, historical interpretation and outreach opportunities and education.

The event included over 30,000 Regular Army, Guard, Reserve, civilians, family members and corporate sponsors. It is one of the key communication platforms employed by the Army to educate and inform government, academic, civic, veteran advocates and leadership on Army priorities and issues impacting today’s Army. 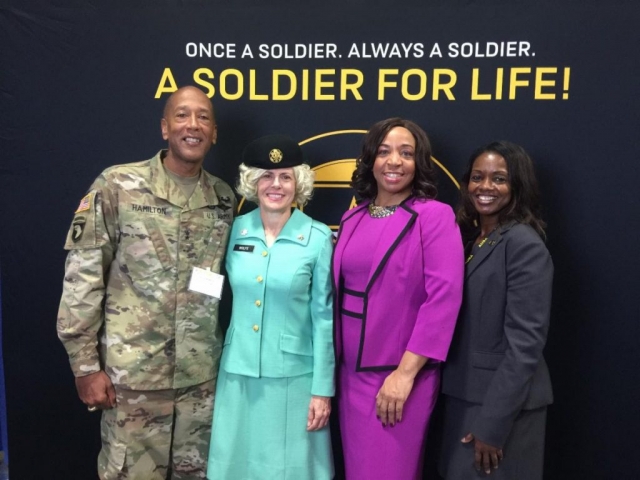 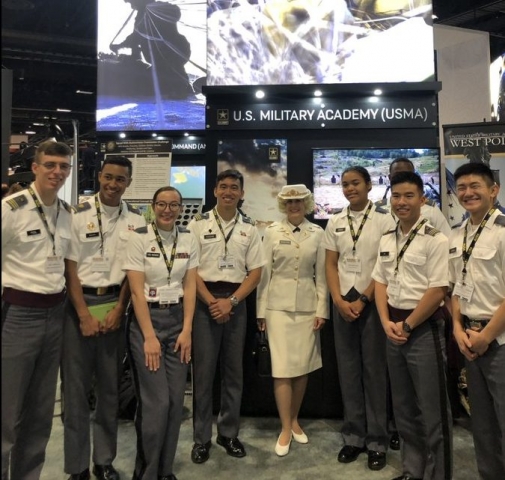 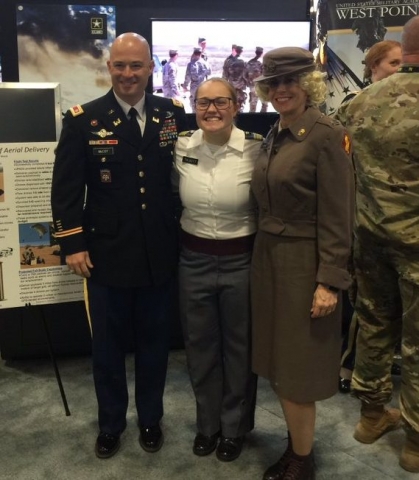 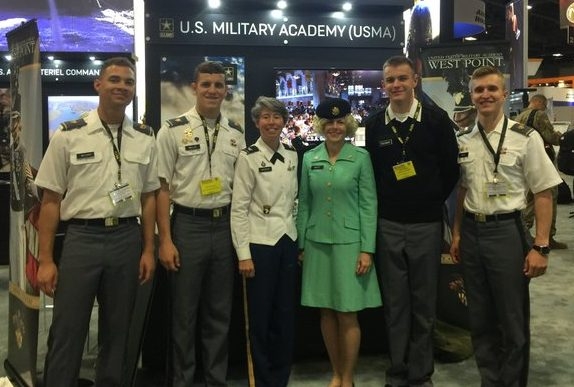 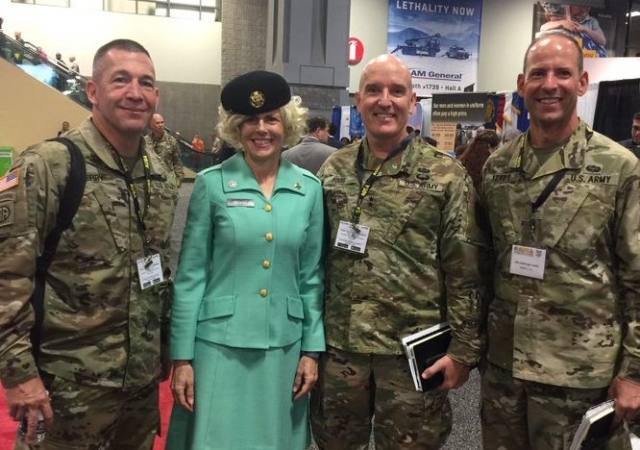 FAWMA attended Appreciation Day at Joint Base Fort Meyer- Henderson Hall on Wednesday, October 4, 2019. Aimee Kominiak and Cydnee Gentry were in attendance and were able to speak with Colonel Kimberly Peeples, JB Meyer-Henderson Hall Garrison Commander about the mission of the Army Women’s Museum. The program was attended by over 300 participants and brought together many veterans, active duty service members, and community members. 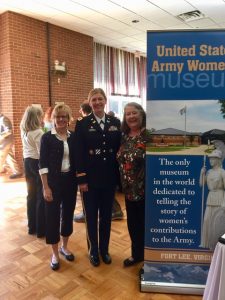 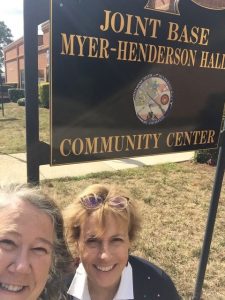 Cydnee Gentry and Aimee Kominiak represented the Friends of the Army Women’s Museum Association at the Fort Belvoir Retirement Day on September 20th at Fort Belvoir, VA. The day brought together veterans, active duty service members, community leaders, employers, and government agencies from the federal, state, and local levels to raise awareness about the services and benefits offered to veterans and active duty military members. SP5 Janet Fitzgerald, who served as an Army artist, working to document female soldiers in training during her time on active duty stopped by to chat about her service. She was assigned to Artist Team 18 from 1976-1979. Over 400 were in attendance and FAWMA was able to share our mission of supporting the Army Women’s Museum. 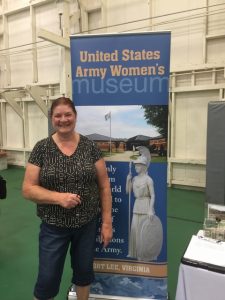 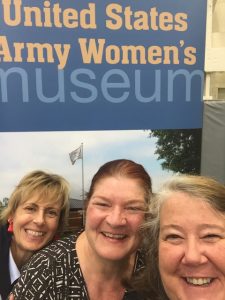